Finding Evidence of Children at Play


Creative play is like a spring that bubbles up 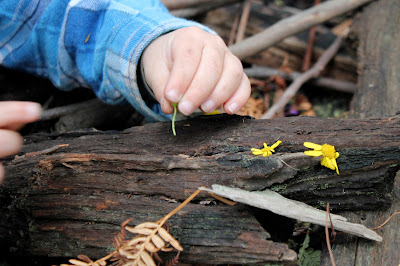 Speaking at a recent event I was drawn to the bush area of the school playground where I found evidence of children having played in this space over a period of time.

With great excitement I became a Play Detective on the trail of evidence of play!

Finding natural elements combined in a variety of different ways brought back memories of my own rich childhood in South Africa. We created dens using gathered grass cuttings to form rooms and doorways. In this Australian space I found similarly constructed cubbies made using the fallen leaves of the She-oaks instead of grass cuttings. There is often a hierarchy in these structures, some positions are more valued than others; children have regular battles or wars with clearly identified rules established by the children and/or passed on from one ‘generation’ to another as children move on and leave the settings or the space.

It fascinates me is that although the actual natural or man-made materials used may differ I have found very similar evidence of children at play in many very different countries - South Africa, Scotland, England, Iceland, New Zealand, Denmark, Norway and Australia. I don’t doubt that I would find similar evidence of children's play in other countries...maybe I should explore more countries as part of my research project!

It is the loose parts in our environment that supports our creativity (Simon Nicholson 1970 - Theory of Loose Parts). Loose parts are natural as well as man-made materials that do not necessarily have a particular function and which can be used alone or combined with other materials.

Children naturally gather ‘loose bits' and tend to give them a 'value' based on how hard it is to obtain them; often these are used to trade or barter for other sought after objects. Stones, sticks, seeds, flowers - not just any but those with particular characteristic as identified by children.

Objects are usually sorted, often using a variety of complex sorting criteria which may not always be immediately evident to the adult.

Children tend to look for find and choose a significant space such as a cleared open patch, a raised surface, hollow, hole or they may choose objects such as a leaf, drainpipe lid, brick, log, stone or a piece of bark, to create a space that will act as the ‘canvas’ or 'frame' for their creation.


Arrangements are deliberate; circles, concentric circles or spirals, angular shapes such as rectangles and triangles (triangles are often 3 dimensional), lined up next to each other either in rows or in lines, stacked or layered on top of each other – each creation is carefully planned to the smallest detail.


Often the objects used have been transported a fair distance away from the source – a stick, seedpod, leaf, stone when there is no evidence of other similar objects in the area – these are treasures specifically chosen by the children and transported to their chosen site.
In urban spaces or early childhood settings where there is a lack of natural loose bits children will use whatever loose bits they can find – Lego,bottle tops, plastic scraps, string, paper etc.

Children the world over play and learn in a very similar way when not directed by well meaning adults (ie no adults in their play space!) – irrespective of the curriculum the adults in that country have developed and then inflicted on children. What is important is that the play is allowed to happen over long periods of time without the children's creation being 'cleaned up' by adults so that they can evolve and grow.


As a scientist my nature is to wonder and theorise about what I see and experience; I believe children do the same - they are born little explorers fascinated with the world around them. I have also learnt not to express this wonder with some adults who do not share this with me just as some children lose that awe and wonder if they do not have somebody to share it with. Children deserve to be with adults who share this wonder of the world with them!

Play Detectives are researchers – what objects have the children used, why, where did they come from, what have they created, what could this represent, can we support and extend this interest?  By reflecting and analysing the evidence of play we can build up a knowledge and understanding of children’s thinking and their natural patterns of creative play.

I had found evidence of children at play, real play – self-directed, creative play over which children have ownership and respect for each other’s work. This play takes place over time with children able to go back and make changes on a daily basis. As the adult I do not necessarily need to know what they were thinking but do need to ensure that children have access to such open ended materials or 'loose bits' as well as the time and space to be creative.

The richness I achieve comes from Nature,

Niki Buchan
Newcastle, NSW, Australia
I have been called many things in my life including a matriarch, wacky lady from the woods and a challenge! I was born in Cape Town, South Africa, moved to Crieff, Scotland in 1997 and as from 2011 in Australia........guess I like challenge, to take risks and to make changes! I have become known as an advocate for children's rights to a rich and meaningful childhood. Supporting adults working with children to feel empowered to stand up for the rights of children - if we don't do it - who will?